One period that has always interested me has always been the Cold War in the 80's.
I remember growing up collecting every book I could. Glad I've still got them.

My favourite army has always been the British Army.

Not many Cold War Brits around in 28mm other than the Mo Fo Falklands range.

These are great minis but I also wanted some other poses to add to my collection.

Saw the Eureka Aden British in glengarry caps, and asked my good friend Leslie Applebee from Uncle Les Models if he could covert them for me.

Below are photos of his work on some of the minis so far, and an AVRE Centurion tank.
More minis and vehicles are on the work bench. 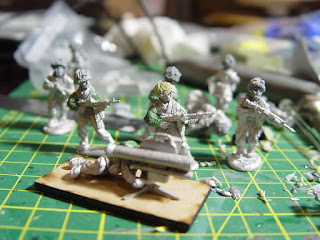 November 5th saw our monthly gathering at our club Company of Dice.

Steven Drury ran me through a quick game of Spectre.

The mission involved a team of US Delta operators rescuing two hostages from a group of Insurgents before they could behead them.


The minis are a mixture of EUREKA, EMPRESS ans SPECTRE.


Got together with John and Phil to play a second round of our fictitious  African campaign of modern Bolt Action.

To add a little fun we throw in two dice of a third colour that activates a random action with the player drawing it, rolling a D10 to see what happens from a chart similar to the Fog of War cards used in the Force on Force rules.

Below is a fantastic narative of the two games played writen by John Diamond.

Lost of photos below.

A recent emergency gathering of the UN Security Council has expressed concern over the recent escalating violence in the small central African nation of Zogo. News reports from creditable sources and Zogo state media have reported a double success for the forces loyal to His Imperial Majesty, Royal Highness, The Right Honourable , His Eminence, General President T’Mbolo M’shombou, father to his people and Messiah of the Nation of Zogo. The President, known for his willingness to drown dissenters in a golden bathtub, was in fine form at a recent 29 hour press conference, where only one question was asked; by a reporter from the New York Times. The reporter was then invited to view the presidential golden bath. And never returned. The rest of the conference was a speech by the Great Leader.

REPORTS FROM THE NORTH:

Latest report reveal that after the failure of the Islamic Fundamentalists in the north, Zogon forces, backed by Presidential Guard forces, finally destroyed the last centres of resistance in the town of Yalingu in Yalingu province.  With a core of Zogo African Rifles, supported by armoured cars and a contingent of the feared Presidential guard, state media reported the destruction of tens of thousands of rebels and hundreds of rebel armoured cars. State media also reported that the local people welcomed the President’s forces with dancing in the streets, food stalls, great fanfare and celebrations.
‘Peace has been restored to the North of My country,’ the President was quoted as saying last night. ‘Only a few rebels were killed, the rest fled across to the east and west and north and south. They are a lost cause. Some have even fled to the nearby troubled nation of Sudan. Should the Sudanese need help, I can help them in their internal problems!’

Independent reports indicate that there has been great slaughter of locals in Yalingu province. Of deep concern to the UN and the African Union was the confirmed presence of Sudanese nationals in civilian attire fighting for the rebels.

Aboulo M’Shombou, cousin of the President and Minister for Information, Propaganda and People’s Education was forced to defend his country’s actions.
‘This is a matter of internal security and not a matter for foreign enemies. Our Glorious President has acknowledged the presence of foreign fighters amongst the rebel scum marauding thru Yalingu and will seek an apology and reparations from the Sudanese government.”
Sudanese government sources have denied official involvement, but sources close to the Sudanese Ministry of Information released a statement revealing that Zogo forces were involved in heavy fighting close to the border.

Zogo forces suffered heavy loses in armoured vehicles as the rebels were using large numbers of Chinese made RPG’s.  One unconfirmed sources revealed that a Unit of the Presidential guard broke and ran during the engagement, fleeing the battle field.
‘A terrible lie!’ declared President T’Mbolo M’shombou. ‘My Guard never runs.’
It was also noted that several noted Guard commanders were invited to bath with the President in his gold plated bathtub. They were never seen again.
Photos smuggled out by freelance photo journalists revealed multiple government armoured cars a flame from rebel RPG strikes.


REPORTS FROM THE SOUTH.

Of greater importance to the stability of the M’shombou regime was the unexpected victory in Patanga province. After the two defeats suffered in recent weeks it was expected that forces loyal to the central government would be forced out of the country’s south and an independent Patanga would be declared. Delegates loyal to the Rebel leader, Beeko Momfasa were known to be canvassing Russia, China, France, Cuba, Kazakhstan, South Africa and Moldova  (what can I say- they were desperate!!) to gain international recognition for Patanga province. Given that the province is extremely wealthy in diamonds and uranium , some nations have expressed an interest.

NEWSFLASH FROM NGUI in BANSGU PROVINCE:
Reports have conformed that  the M’shombou regime has won a stunning and unexpected victory at Ngui. Forces loyal to President for Life T’Mbolo M’shombou, have declared victory and have cleared rebel forces from Bangsu province, driving them back into Patanga.

Reports from the battlefield indicate that a number of rebels changed sides during the battle and began shooting at the forces of Momfasa, causing great disruption to the attacking rebels. Of greater importance, crucial to the ongoing rebellion, was the reported death of the rebel leader Beeko Momfasa.
Unconfirmed reports stated that the Green Beret wearing rebel leader was leading a unit of his Patangas when his head (with green beret) was taken completely off by the shell from recoilless rifle!
President T’Mbolo M’shombou, in a second statement to the press that lasted 18 hours declared : ‘My trusted assistant and Witch Doctor, Amoua Ambaoulou, told me that a vision had come to him and that I would be victorious! Well, as you all know, I have been shot in the chest by Scud missiles, 12.7mm bullets and have been run over by T-55 tanks- and as you see, I am healthy and whole. Momfasa on the other hand, shows that he was weak- not being able to stand up to one little recoilless rifle shell. It is only a matter of time before I have destroyed the rebels.’

Rebel leaders have now turned to Beeko’s brother , Meeko, to lead the rebellion.
Sources close to the new rebel leader where clear in their explanation of their recent defeat:
‘We were undisciplined. Some of our men had been bribed by the wives of M’Shombou and changed sides during the fight. Our men also ran over mines and failed to destroy the enemy’s armoured vehicles. We have been defeated, but we are waiting. The Baako tribe will have an independent nation. Even now we are in negotiations with powerful friends who know of the cruelty of the evil T’Mbolo M’shombou. We have something that T’Mbolo M’shombou, does not. He may have a golden bath tub, but we have uranium and diamonds.’

The UN has asked members of the security council to consider troop deployments to southern Zogo. The French Ministry of the Interior has expressed concern about the rising level of violence and France’s willingness to deploy troops. Of even greater concern was a recent report in the Daily Mail that Momfasa had approached independent military contractor firm, BilgeWater Inc.