Something I've always wanted to do for a while was a fictitious African war.
Thanks to my good friend John Diamond, he  has come up with a fantastic campaign scenario.


The African Republic of ZOGO ( ALL made up!)
CIA FACT FILE:

Since independence Zogo ( a very small country tucked away between it’s three larger neighbours : Central African Republic, Sudan and the Democratic republic of Congo) has a troubled and violent history.

History:
Since independence from Belgium in 1964, the country was ruled by the brutal dictator Aboiye Mshombou; a former sergeant of the Zogo African Rifles  (ZAR). The  ZAR was the key unit that provided the defence of the colony during colonial times. Consisting of 10 infantry battalions, an armoured battalion, an artillery battery and a light air arm, it was mostly recruited from the Mbala tribe.  It was a professional force with white ( Belgian and French) officers.

After independence, Aboiye Mshombou , a member of the Mbala tribe seized power with the help of many of his fellow tribesmen. Killing any dissenters he ruled with an iron fist for 37 years. He allowed Cuban and Soviet advisors into the country to bring greater benefits to his own tribe and the mining of diamonds, uranium, tantalum and other precious minerals.  The country was never completely settled as the north-east of the country held a small Muslim minority that was keen to secede and create a separate nation ( or join with the majority Muslim nation of Sudan next door) This area of tension has simmered since the 1960s, exploding into violence in the 1970s, 1990s and now with the rise of groups such as Al Qaeda again in the 2000s.
To the south and south west, other tribes, predominantly Christian and/or animist resented the Mbala tribe’s hold over power and although various resistance movements arose- one that included the use of foreign mercenaries to gain independence in the late 60’s and 70’s, Abioye Mshombou crushed these with Soviet aid.

After his death in 2001 the country remained fairly stable under the control of his nephew T’mbolo Mshombou until militant Islamic preachers began to enter the north east of the country. The simmering tensions exploded in 2009 and a separatist movement led byAbu Bakr el Humar has been in full swing since then. Without super power backing, after the disintegration of the Soviet Union, T’mbolo Mshombou (the nephew) is basically on his own, but looking for support from his neighbours- unlikely at this point. It is rumoured that he has engaged the services of Blackwater inc to train and advise his ZAR.

To the south west, the majority tribe of the region, the Baako tribe has resented the minority rule of the Mbalas and this too has spread into open conflict. Although poorly organised the Baako control the main diamond and uranium producing areas of the country. It is believed that the leader of the Baako tribal Militias, Beeko Mumfasa , has also engaged private military contractors, with the promise of mining rights in the event of independence.

One interesting factor is the small number of white settlers in the south west of the country , who were welcomed by Mshombou after the collapse of Rhodesia. Although numbering a few thousand, they have the support of the very small minority tribe, the Shutsu tribe, and they are well armed and organised.


Zogo Government Forces try to stop the Baako rebels from uprising in the south. 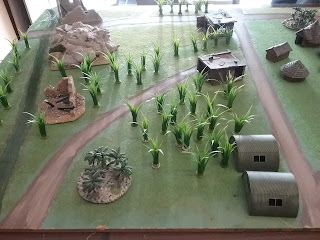 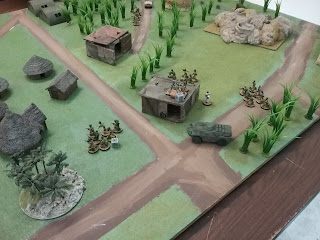 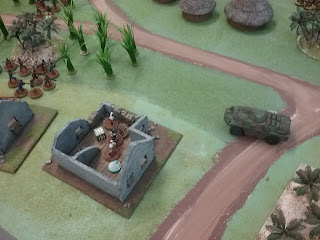 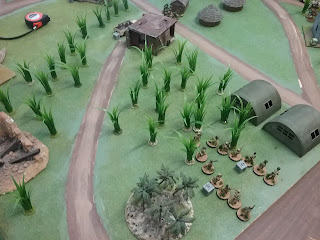 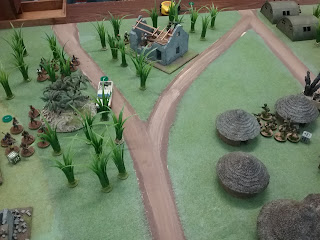 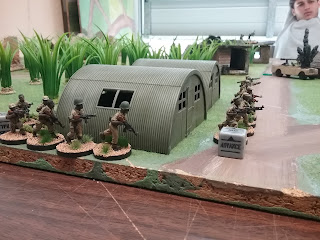 Round one went to the Baako rebels stopping the Zogo Forces.
They now had a foot hold in the south of the country and were building up momentum.


Having failed to stop the Baako rebels from rebelling in the south, Zogo Forces re mobilise with a larger force and try to crush the rebels who have now advanced. 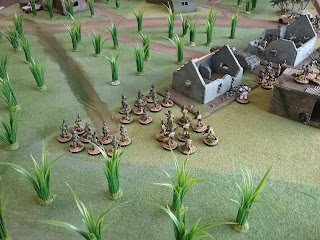 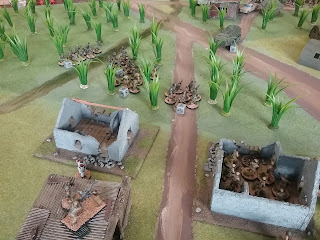 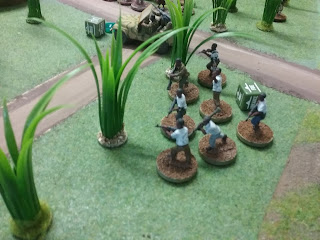 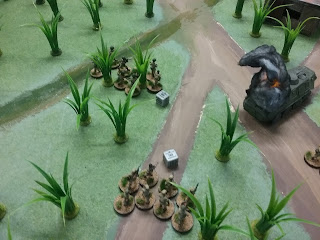 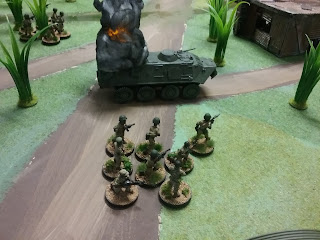 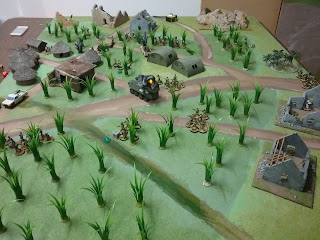 Round two turns out to be a disaster for the Zogo Government Forces as they fail to stop the uprising in the south by the Baako rebels for a second time. They lick their wounds and withdraw to await the arrival of an armoured convoy that has been sent from the Capital made up of the Presidents Elite Presidental Guard. ( Game to be played another time).


Meanwhile in the north of the country.

With word of the Zogo Forces failing to stop the Baako rebels in the south, a militant Islamic movement led by Abu Bakr el Humar decides to lauch it's own attack on the a small garrison of Zago troops posted near the river. With there backs to the river the Zogo troops fight a desperate battle to hold on. 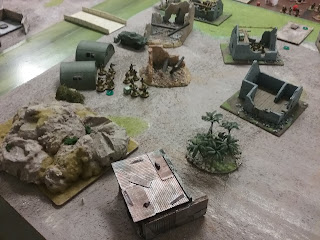 This time things went better for the Zogo forces as they beat of the attack, with the Islamic militants crossing north back over the border into Sudan.


Here is the after action report from John.

GAME ONE:  Battle of Alako

Personally leading elements of his beloved Zogo African Rifles, General President T’mbolo M’shombou was confident that he could put paid to some straggly, drug stuffed, starving rebels.
An impetuous advance well into Baako heartland, the southern province of Patanga, with a number of ZAR units, with armoured car support, the President found the Rebels waiting just to the north of the city of Alako. Alako is the centre of the country’s uranium mining.
The President’s famous ability to prophesize the future failed the great man on this day.  The short violent clash led to a REBEL Victory.  The rash assault of the vehicles saw both the tehcnical and the armoured car destroyed by accurate RPG fire.
‘Where did they get those?’ mused the President, thinking of the large numbers floating around in his sourthern neighbour, The Democratic Republic of Congo.
At one stage during the combat a wounded group of civilians ( we were using the Force on Force Bush Wars Fog of War Cards) pleaded with the Government forces for help. The Great President was more than obliging by sending more bullets their way. This atrocity would later cause problems for the President.
The Government lost an armored car, a light vehicle and three complete squads were wiped out.
Rebels recovered 1 light vehicle and repaired their own. They then followed the retreating government forces who were retreating to the north of Patanga province.

Unable to believe the outcome, The Great and Noble President called on another detachment of his ZAR. Combining the reminder of his first force, he withdrew from the province. Then after summoning an armoured column of his Presidential Palace Grenadier Life Guards, he launched another attack- without waiting  for the Guard. It is believed that his family witch doctor foresaw a great victory if the great man drank elephant’s blood and crushed goat testicles.
‘After all,’ he claimed. ‘Am I not the most popular leader  in  world History? I was democratically elected with a 99.7% approval rating! I am more popular than the Australian Kevin Rudd! ( this was 2009). More enlightened than Kim Jong –il. More Wise thanGeorge Bush?’
His advisors assured him that this was all true.
So, encouraged by his incredible insight, and democratic mandate, he led his forces against the rebellious scum of Patanga province.

In the second clash in the north of Patanga Province the Rebel Leader Beeko Mumfasa  in conjuction with his brother Meeko inflicted another, even more humiliating defeat on the Great Man. The Brothers were easily identified on the battlefield by the red and green berets they respectively wore.  In a repeat performance of the first action,  his 3 light vehicles and armoured car were rendered  inoperative due to machine gun and RPG rounds in the very early stages of the fight.  To add insult to injury, a group of hostile civilians ambushed and destroyed one of his units- in revenge for the massacre of civilians at Alako. Particularly galling to the President was that the Armoured car was his personal favourite and was named after one of his 67 wives; Moeshia .
In response  to the defeat  the General President had his family witch doctor drowned in a bath tub of eleohants blood and crushed goat testicles.

Retreating in Bangsu province, the remnants of the government forces  fell back into the main city of Ngui, in the hope that the armoured column from the capital would arrive. But this was not to be. They were followed quickly by the Rebels. In a disturbing report, the President was told that some Baako tribesmen from the Congo were now joining the forces of the Mumfasa brothers. The Rebels also had repaired the armoured car named after his wife as well as the technicals. Outnumbered and outgunned, the President and his forces in Ngui await the assault of the Rebels. (Stay tuned for more!)

GAME THREE: IN THE NORTH

Very disturbing news reached his Eminence as he sat brooding in Ngui.
There had been rumours of Islamic militant preachers preaching Jihad in the north eastern provinces. The President had acted with his usual calm and benevolence. He hadthe offending militants arrested and drowned.
Islamic Insurgents declared rebellion in the northern city of Yalingu (Yalingu Province) on the border with Sudan.They then attacked the city of Tambura in the south of Yalinga. The small garrison of police and ZAR held on grimly . In a stroke of luck, an armoured car arrived to help the defence and the militants withdrew rapidle back to Yalingu.  It transpired that the commander of the Armoured column, of the Presidential Palace Life Guards had decided to dispatch an armoured car which arrived in time and helped drive the northern insurgents back.
Understandably the President was most upset, that a junior regional commander should actually win a victory, when he had suffered two defeats. So he sent him congratulations. And had him drowned.
So the situation in the north seemed contained, but the south was a seething mass of discontent.